A day late and a Dollar short as they say but we got snow on Boxing Day!  It would have been great for Christmas Day but at least we didn’t have to go out!  It started snowing at about 5.00pm and carried on for most of the evening and as you can see from the front of our home, it has settled well!

Our vehicles were nicely covered!  At least it was the evening and not 4.00am in the morning when DH had to take Eldest and Girlfriend to the airport in Birmingham as they have gone to Marbella for five days!  Youngest went in the car to the airport (Treacle and I stayed in bed!!!!) and they were home again by 7.00am!

The back garden blanketed in snow

Of course you all know who loves snow!  She was in her element but it was very cold as well, so Treacle did not stay out too long in it!

Paddy paws in the snow!

DH, Youngest and I are going to venture out in it later as we are having a day out today.  Christmas was lovely and we had a great day on The Day.  More pictures to follow.  Hope everyone had a lovely, peaceful day.

Wishing All My Followers and Those Who Read My Blog

A Very Merry and Peaceful Christmas

I am getting ready for Santa arriving tonight.  I have my hat on, which has been washed (Mom washes everything!)  I am getting ready to hang my stocking by my day basket and I am going to bed early tonight with Youngest.

I can’t wait I love Christmas!!

Now Mom, you are sure that Santa does bring toys to us doggies?

Yes Treacle he brings toys for Doggies, if they have been good.  Have you been a good dog this year?

Don’t worry Treacle I am sure he will bring you something!

Oh good, otherwise I will be raiding the Boys things!!

I hope everyone has a very woofy Christmas and I will see you all in the New Year!

I finally got it finished!  I cannot believe that it took me so long, but I ran out of the cotton I was using to quilt it and I couldn’t find it anywhere other than John Lewis where I got it from!!!!  So it was delayed.

We went out last night to dinner with the Grandparents and had a great evening.  It was lovely to catch up, as we haven’t seem them since July a year ago so there was a lot to catch up on but it was great.  The food was lovely too.

Youngest was helping to hold the quilt so I could photograph it.

Today I have been cleaning the house, ready for Christmas, and tonight DH and Youngest are out so I have a huge basket of ironing to do and then that is it for a week!  Tomorrow I have to collect the meat and fresh food for Christmas at 8.00am and then it is all done and ready and all we have to do is wait for Santa Claus to come.

Treacle is getting very excited!

Nottingham Council House all lit up in Christmas colours.

We had another lovely evening on Saturday night.  The Boys and Girlfriend and DH got their Christmas shopping done and I got to have a wander around the stores window shopping.  I then stopped off at my favourite store, John Lewis, for a quick cup of coffee and this was the view from the store windows.

I can’t say that I am a fan of these blue lights!  Everyone seems to have them at the moment, but I think they look too stark.

When we all got back together we walked down to the Market Square where the Christmas market is on and the ice rink.

The Christmas Tree all lit up.

This picture turned out fuzzy as DH was driving and I was trying to take the picture!  It is a lovely decoration 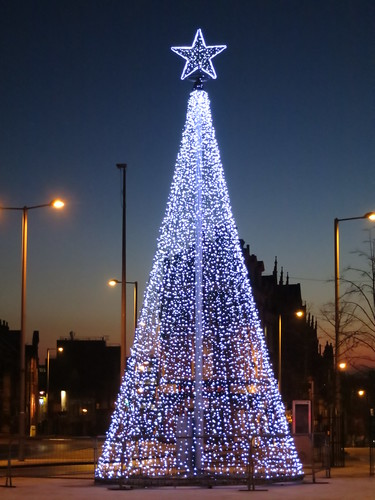 A not blurry picture from the Nottingham City Council Website!

We all went for a meal at one of our favourite restaurants in Nottingham, Man’s, and it was exactly six months from when we went for my Birthday!  We always have a lovely meal there.

Yesterday DH and I visited all the Aunts, Uncles and Cousins in Nottingham and visited his parents grave to leave a wreath.  It was a lovely day catching up on everyone’s news and we got home about 6.00pm.  This is what I love about Christmas, seeing family and friends and having a lovely social day.

Today was the first day Youngest and I didn’t have to get up to get ready for school, yeah, so we had a late breakfast and I have been finishing the baby quilt and doing grocery shopping for tomorrow (I have cheated and done it on-line!!!).  I just need to sew the binding on and wrap it up and we are seeing the Grandparents tonight for dinner, as they are over from Jersey. The four of us are going out for a meal tonight to catch up (another meal; oh dear I will have to be planning my diet for after the New Year!!!!!)

I hope your day is going well and the plans for the Big Day!

It was the Swimming Club’s Presentation Night last night and you can see all the medals and trophies waiting to be presented to all the swimmers.

Youngest getting one of the medals he won from Chris, one of our Coaches who retired last night after fifteen years with the Club.

Eldest receiving a trophy from our Club President, Frank Mansey, who is a founder member of the Club and still going strong after 42 years in the Club!

This is Eldest’s Cup we have given to the Club to mark his three years as Captain.

This is also another cup we gave to the Club a few years ago.

Eldest’s last job as Captain to award the Captains Sheild for the swimmer who the Captains feel has given the most during Galas this year.

It was then announced who the new Club Captains for the coming year are and to our absolute pride and delight Youngest was named Boys Club Captain!  So Eldest has handed the mantel over to his brother!

A very proud and delighted Youngest with his new Club Shirt (with DH in the background talking as usual!!!!!)

Girlfriend and Eldest before the evening began.

Chris giving his speech on his retirement.

Chris, his wife Liz and DH with his leaving gifts.  We are all sad to see him leave.

We had a great night, if long (!), and Youngest has just about come down off the ceiling now in his delight.  This morning Baby Evalyn and parents are calling in for lunch and to swap presents and then the Boys are off for their hair cuts and then tonight Nottingham to see the lights.  More pictures tomorrow.

Hope you are all having a lovely weekend

Well I don’t know where Wednesday and Thursday went to!  They disappeared in a flurry of playing Santa and delivering presents, more baking, this time cheesy stars and sausage rolls, delivering the last of the Christmas cards in the village (with a reluctant Treacle who really didn’t want to go for a walk!) and all the everyday things that need doing.

Youngest has now finished school for two weeks and swimming finished last night for two weeks (Yeah; I am sure you can hear me cheering!) and DH finishes for Christmas on Tuesday.  There is a million and one things still to do but these are what I call the nice things to do and what I love most about Christmas.  We are off to see all the family on Sunday and we spend the whole day visiting and drinking lots of tea and eating lots of mince pies and catching up on all the news and I love it.  Saturday evening we are off to Nottingham to see the Christmas lights and displays and have dinner and Monday we are off delivering the last of the gifts.

I managed to get the small Christmas cakes iced yesterday and I certainly don’t need to go to the gym this week having used 1kg of icing sugar and had to beat it until smooth, oh my upper arms!!!!

Just to show you there are two cakes and not one photographed twice!!!!!!

Here is our cake also iced and with the various decorations on.  These are mine as opposed to the ones handed down to me by my Grandmother, I alternate each year.

Tonight is the Presentation Evening for the swimming club where all the trophies and medals are handed out after the in-house Galas and there is also food (what the swimmers are most interested in!) and a disco.  It is going to be a long night!

I hope everyone’s plans are going well for Christmas and you all have a lovely weekend.